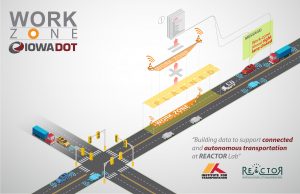 That nightmare scenario doesn’t exist thanks to the proactive work of the U.S. Department of Transportation (DOT) that initially brought together six agencies, including the Iowa DOT, that produce work zone data and six companies that would use that data to produce navigation tools. Now, cities and state transportation agencies from across the country are working together to come up with a common language around work zone information through the Work Zone Data Working Group.

“Providing a standard way to communicate work zone data ensures that third parties are getting the same or similar data regardless of the state or jurisdiction they are driving in,” said Skylar Knickerbocker, an InTrans research scientist who has been aiding the Iowa DOT in the Work Zone Data Exchange project and is a co-chair of the Work Zone Data Working Group Specification Sub-Group.

“The specification tries to balance what agencies can provide at this point and what information third parties would like to have,” added engineer Sinclair Stolle of the Iowa DOT.

The effort is not only aiming to provide better information to road users navigating through work zones but it ultimately is meant to save lives. There were more than 750 work zone-related fatalities in 2018, according to the Fatality Analysis Reporting System from the National Highway Traffic Safety Administration.

The Working Group completed its first set of guidelines in the fall of 2018, and a second version was approved in January. In order to continuously improve the data collected, and how it’s shared with third-party data consumers like navigation apps, the Working Group aims to update its specifications twice a year. The Iowa DOT, with the assistance of InTrans, has been involved since the beginning and became the first state agency to begin producing a work zone data feed.

Creating a shared terminology is more difficult than it may initially sound, as each jurisdiction could have a different way of describing where a work zone starts and ends, or conveying which lane is closed on a multi-lane highway. Knickerbocker noted another challenge is finding a common way to communicate whether the work zone includes any road restrictions, such as weight or width restrictions, a critical piece of information for our nation’s trucking industry.

“You’ve got 50 states as well as other cities all doing it their own way and all thinking they’re doing it the right way,” Knickerbocker said. “It’s a constant balancing act of providing enough details and not getting so much into it that it makes it impossible to use.”

In addition to improving safety and efficiency in work zones, the project also will help as connected and autonomous vehicles (CAVs) saturate the market. The common language that helps navigation aids now will be critical to ensuring that CAVs can successfully operate through work zones tomorrow.

“Right now, we’re collaborating with different states and with third-party consumers on what data we can provide at this point from a state perspective and what data consumers are looking for and aligning the expectations of what is feasible now and what they may want in the future,” Knickerbocker said. “There’s thousands of ways to communicate, and so we’re looking at what’s the best, most efficient data that is possible for DOTs to send and for motorists to consume.”

The Work Zone Data Exchange Specification project grew out of a need for work zone data that was identified through the U.S. DOT Data for Automated Vehicle Integration effort. It led to the Work Zone Data Working Group being established under the Federal Geographic Data Committee Transportation Subcommittee.